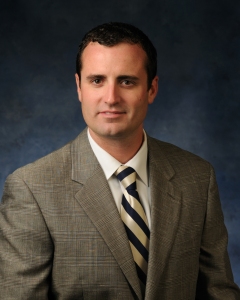 Years In FPRA: “I’ve been a member of FPRA for 3 years. Prior to my PR career at OUC, I worked as a television news reporter for about 10 years. I wanted to learn more about the field of public relations and meet professionals who could share their experience.”

Favorite FPRA Event: “I enjoyed listening to Lisa Malone, who served as a guest speaker at a monthly breakfast event last year. She talked about her experiences at NASA which was very interesting.”

Explanation Of Your Job: “My primary focus is on media relations, but I also still kind of report. I shoot, edit and write stories about some of the great projects and employees here at OUC. I enjoy getting to know them, but it also makes me better at media relations because I have a greater understanding of the work they do. We put the videos up on our YouTube channel.”

Exciting Achievement: “The learning curve of my job was an achievement. Initially, I had to work to understand some of the rather complicated terms surrounding electric operations. I remember the first time I got a call. I had just stepped into my role and was told, “the static got into the primary and we refused the lateral.” I was so confused! Thankfully, I actually now know what that means and how to explain it. Also, I was very proud to receive a state FPRA award last year for a video on our employee charity campaign.”

Fun Fact: “I am married to another former reporter and current FPRA member, Laureen Trudell.”

Final Thoughts: “After moving around a lot as a reporter, it’s nice to be somewhere without constantly wondering what your next media market will be.”

This entry was posted on Friday, January 18th, 2013 at 12:52 pm and is filed under 30 February 2013. You can follow any responses to this entry through the RSS 2.0 feed. You can leave a response, or trackback from your own site.