Give a brief explanation of your job.
I provide strategic communications advice and counsel to clients in the utility, higher education, travel/tourism and economic development industries; manage our Message Matrix® message and media training program; and, support account teams that deliver outstanding results to clients every day.

How long have you been a part of FPRA? Why did you join?
I first joined FPRA in the mid-90’s for networking, professional development and leadership opportunities.

Tell us an exciting achievement.
Being named the PR Professional of the Year in 2013 was a true honor, and I’ll forever be grateful to FPRA for that opportunity. I get the most satisfaction out of achievements that aren’t public – things like receiving words of thanks from a client, and watching members of our team succeed and grow. On the personal side, my most exciting achievements are works in progress … two little girls who are growing up to be intelligent, thoughtful (and occasionally exasperating) young ladies.

What was your very first job?
I quit my first job at Winn-Dixie after one week and a million cuts and bruises from unloading box after box of canned goods. My first job in the industry was an internship with The Family Journal, which provided a great education on writing and editing. 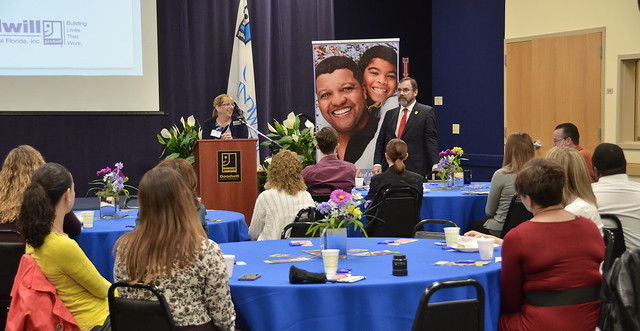 Goodwill Industries is one of the first “social entrepreneur organizations,” Oakley said. In Central Florida, Goodwill operates 27 retail stores. They provide job training for people with difficulty getting jobs. For example, they help people that have been released from jail or have disabilities to get jobs. Oakley explained that they went from doing little marketing to aggressively marketing their services.

Goodwill Industries hired a public relations firm, Linda Costa Communications Group, to assist with media buys. They reduced expenses by using TV commercials produced by a partner organization in another state. After testing the TV spots with local audiences, a commercial featuring a sister that Goodwill Industries helped to find a job for her disabled brother succeeded. Click below to see the “Jim and Shannon” commercial.

The results of the public relations campaign included more than 60 media placements. The number of donors increased by 16 percent.

The tour of Goodwill Industries included a backstage look at their operation. Pariseau showed members the book donation operation. Donated books are sorted and the best books are cleaned and given to school children. Other books are either sold online or they are recycled. The organization receives many donations of clothes. They improved their service by providing newer stores and convenient drive through donations. With the new service, donors would not have to get out of their cars to make a donation.

2015 is a thing of the past for Quotes, the PR club at UCF. Elections have taken place and we have a wonderful new executive board for the 2016 school year:

Quotes has started the semester off with two fantastic PR professionals, Mark Schaub and Jennifer Bisbee, APR. Members were thrilled with the amount of knowledge they were able to take away from each of those meetings. This spring semester we are looking forward to the agency tours and guest speakers planned at our bi-weekly Thursday meetings. Quotes is also preparing for a special trip to Tallahassee for members and professionals.

Each meeting is at 4:30 p.m. in the Nicholson School of Communication on UCF’s main campus. Our goal is to offer incredible opportunities for professional development, networking and the understanding of public relations for every student, no matter their major.

Many things are in the works for Quotes this year. A major one being Intern Pursuit. Students are already getting their resumes together and researching potential companies. It will take place on March 16 at 6 p.m. in the Pegasus Ballroom on UCF campus. If you are interested in taking part in this event, please feel free to email quotesevents@gmail.com.

We could not have had such successful semesters if it wasn’t for the support of FPRA. The past and present executive boards would like to say thank you. It’s been a phenomenal experience being able to participate in FPRA events and staying connected to the professional world as a student.